So. Croad Langshan. The only thing they have in common with the Andalusian Bantam, the subject of our last blog, is that they are chickens and they are on the Rare Breed Survival Trust watch list!

So how did these huge majestic (there is the answer!!) birds worm their way into being one of the most loved breeds we have. This story starts in a different place and takes a bit of a curved but steep trajectory to where we are with the breed today…

Originating in the Langshan region of China, this ancient breed were first imported into Britian in 1872, by Major F T Croad. His niece worked so hard to promote the breed her name was added to the Langshan and they became known as Croad Langshan. Post World War II their numbers fell into decline, and they were rescued by the Rare Poultry Society. They were originally black birds with an amazing beetle green sheen, but whites have also been bred (for the brave hearted keeping such big birds clean!!!)

I was originally researching them as I was fascinated by the idea of having boxes of eggs with as many different colours in as possible. White, brown, dark brown (marans) blue, green and PURPLE – what? Purple eggs – surely not? 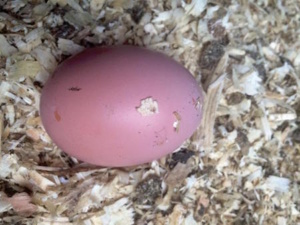 Well the reputation of the Croad Langshan as a breed that lays such a golden (purple!) egg follows it closely… we still get lots of calls looking for the elusive pink/purple egg now. So I opened up the book of Google and tried to find some. Now this is indeed a rare breed. Sadly as with many rare breeds in poultry, due to the lack of a individual marking or any movement licences etc, its hard to know exactly how many there are in the UK. But clearly they were not easy to find.

At the fated Australian sale (See our Andalusian Blog) I found out there was some Croadies. So they were put on the shopping list. I had no real clue of the breed standards for these birds, so chose three on the bases that they had the most feathers!!! It had been quite an intensive breeding set up, and they were looking a little worse for wear. The girls needed factor 50 on their backs that first summer – their first time on grass and in the sun

The progeny of this first group did well the next year…then a new male was bought in from a champion breeder – Howard. And another successful breeding season ensured, with our schools being were thrilled with the croad chicks that hatched that season – many called PINGU – and you can see why!! 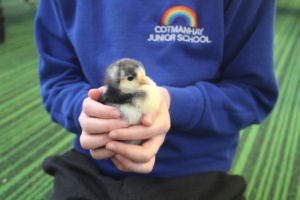 And the birds grew up into a motley crew – after careful selection we entered some Croads into the National show for the first time. And some of the birds were so big getting them home to our show accommodation could sometime present a problem and they had to sit on our knee – don’t worry he wasn’t driving himself! We took 3 cockerels, Graham, Saul and Solomon.

We were over the moon to find that Graham had not only won the best Cockerel class but had won the Best Croad Langshan overall – and gained a place on champions row. We were delighted. There are many meetings taking place at the National so off I trotted to those with a big smile on my face. The biggest shock was yet to come! When I went round just before the show closed to feed and water my birds – Graham was not in his pen on Champions Row – he had been moved to the Inner Champions Circle as we had won Best Ladies Award! This means he was in the best 14 birds in the show of over 7000! What an accolade! The trophy for this award was won by the Queen Mum and her Orpingtons in 1985 so it was a wonderful connection. We also won Best Female so we really were in the ribbons! 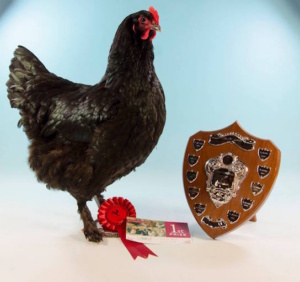 Needless to say we returned with heads high and focused on our next years breeding with our schools. Everyone loved their Croad chicks especially as the dad was a champion – could any of our schools hatch the 2016 Champ?

Unbelievably they did! One chick stood out from the rest from the start – the son of Graham – Katzuma was always a huge lad and he went on to retain the title of Best Croad in 2016! And narrowly missed the best ladies again but won the Best Feather Legged Trophy…. 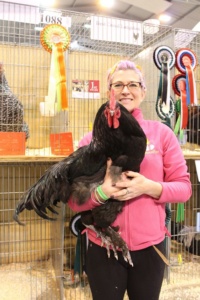 So needless to say with two major championships under our belt, the worlds cutest chicks, and the most stunning majestic birds – these Croadies are always going to be part of Eggucation’s work in #ConservationInTheClassroom

Can your school hatch the next champion?